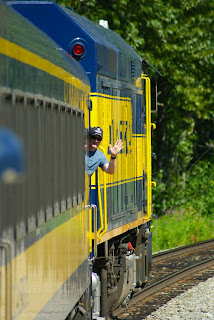 The Alaska Railroad Hurricane Turn Train is one of the few flag-stop trains left in the country.  It runs only 4 days a week in the summer and once a month in the winter. The locals use the train for accessing supplies.  Tourists use the train for backcountry hiking, fishing, hunting and adventure.  We rode the train to join in the fun, and we were not disappointed.  Without assigned seats, we were free to wander about the train and met many interesting characters.
The Hurricane train consisted of two passenger cars, a car with elevated bubble top seating, two engines – each pointed in opposite directions to facilitate the return trip – and the baggage car, a box car equipped with racks, the large doors open on either side.  The scenery was incredible as we rode along tracks that followed the route of the Susitna River.  Mt. Denali rose from the forested hills, reaching for the blue sunlit sky.
Moving from the passenger car to the elevated bubble car, we realized that we much preferred having the wind in our faces.  We found our way to the baggage car.  The wide-open doors afforded us wonderful views and a gentle breeze.  The friendly conductor, sat at a desk.  A zip lock bag, with the words US Mail written with a sharpie was taped to the wall.  Locals can use the train to send their mail to civilization when they need to.  We talked with him about the things he’s seen, about riding the rails and his 40-year career with the railroad.  When the train stopped to let off a group of white water rafters.  We helped them unload their gear and waved goodbye as the train began to move away from the stop.  This is where the action was.  We’d found a place to ride out the seven-hour trip.
We continued on, stopping to let a mother black bear, and her three cubs cross the tracks.  Unsure of the big train, she sent her babies up a tree on the other side, then barked for them to keep following when all was clear.  The three adorable balls of black fur scampered down the trees and followed their mother into the forest.  What an amazing trip this was turning out to be!
The train slowed as we approached a group of 15 young men and women between the ages of 16 and 21.  They boarded the train with their large packs.  They appeared to have been hiking for quite some time.  We watched as they threw their packs into the baggage car and then smelled them as they wafted by.  Yes, they had been in the Alaska wilderness for a while.  Preferring the fragrance of flowers and soap to body odor ripened in the heat of physical activity, rain and wilderness for weeks on end, I suggested to Alex that we avoid them.  They made their way to one of the two passenger cars and parked themselves and their stench inside.

Later, as we stood in the baggage car, watching the wilderness go by, a few of the teenaged hikers joined us.  They reminded me of my kids.  Their banter was irresistible.  I had to inquire about their adventure.  Turns out, they’d been on a month-long wilderness leadership course.  Thirty days of intense wilderness training to bring out the best in them, to challenge the limits of their endurance and cause them to bond with strangers from all corners of the world – strangers, now friends, laughing in the baggage car of the Alaska Railroad Hurricane train.  One young man in particular, Andy, drew us in. As we asked questions, he was eager to fill us in on details of their adventure.  He was an open book, a gushing fountain of anecdotes, longing to share his adventure with us “parent” types.  He hadn’t had contact with his family for 30 days.  He was eager to ease the pressure of the stories waiting to explode from his memory. He reminded me of my son as he dropped his guard and shared the many things he’d learned in the Alaska wilderness.

I asked him to share his most poignant lesson:  What will he take away and remember and use for the rest of his life?  He thought for a minute and then confessed:  “I wrote down fifteen things that I learned.”  He disappeared and returned with a small index card on which he’d written fifteen short sentences, each profound, each a nugget of wisdom from the heart of a 17-year-old young man.  I wish I’d taken a photo of his list.  I’m sure he wouldn’t have minded. His list consisted of things like:  First impressions aren’t always accurate.  When you feel like quitting, keep going.  The steepest mountains have the best views.  See what I mean?  As our conversation progressed, we discovered that he is a believer.  He was going to take what he’d learned and share it with his church…his youth group.  Whoever hears his words will be blessed, I have no doubt.

We asked him and another boy what they were most looking forward to when they got back to civilization (the Hurricane train is transportation only, no food or drinks, not even water was available on board).  They did not hesitate to name the food they’d craved the most.  Pizza!  One of their leaders had promised ice cream when they arrived in Talkeetna and that was in the forefront of their minds as well.  Food.  Teenage boys.  It was a stupid question…of course that’s what they were looking forward to!  Andy pulled out his index card again, turned it over and shared the list of foods he’s been craving.  We laughed, and as I listened to their stories, the mother in me longed to produce a pizza, some juicy hamburgers and milkshakes…I had an overwhelming urge to feed them.

Eventually, Andy and the other boy left the baggage car and sat with their friends in one of the two passenger cars.  When they left, I realized that their odor hadn’t been all that offensive…perhaps because we were standing in the breeze of the open door of the baggage car, or perhaps the sweet fragrance of enthusiasm and joy had overwhelmed the stench of a month-long adventure that had changed the teenaged boys into men.
SaveSave
SaveSave
SaveSave
SaveSave
at July 14, 2016