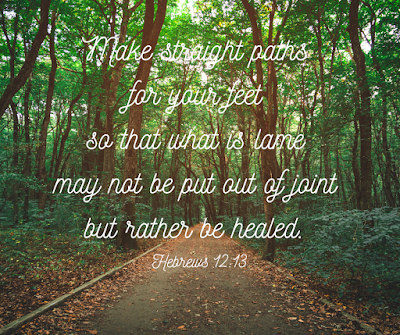 I like to write the scriptures...literally.
The other day, I copied this verse:

Hebrews 12:13...make straight paths for your feet, so that what is lame may not be put out of joint but rather be healed.

It spoke to me.
I wasn't sure why.
I use a study bible, but there were no notes on that verse.
Plenty on the verses before and after, but that verse floated in mystery.
After reading it five or six times, I moved on.
But I pondered it that day and the next.

I recently wrote a new little prologue for my novel.
Two pages of fun before the first chapter of the book.
I liked it, but something was missing.

How do I make it fit...make it comfortable?
I prayed about it.
Lord, I know this is right, but it seems out of place just sitting there before the first chapter.
It's a whisper of hope.
My readers need it before diving in.
As I prayed, it hit me...
Start with scripture.
But what verse?
I thought about it.
And then I remembered the verse that jumped off the page.
They jumped and jumped, and I couldn't figure out why.
Now I knew.

My main character has been hurt.
She is nurturing bitterness as a prized possession.
But what does Hebrews 12:13 say?
"Make straight paths for your feet, so that what is lame may not be put out of joint but rather healed."

Knock me down with a feather.

She wants to be healed, but it's become comfortable to hold on to the hurt.
Ouch. Been there, done that.

Will she move to the straight path so what is lame may not be put out of joint but rather healed? You'll have to read the book.
Maybe, just maybe it'll be published one day!
at August 20, 2019