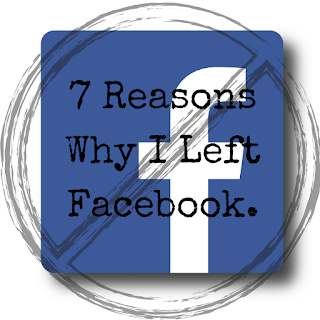 It took me a while to jump onto Facebook.

I wasn't completely sold on the whole social media thing.

But when I finally did, about five years after all of my friends, I found the connection to people I'd lost touch with over the years was a great thing. But I fell into all the typical social media nonsense. The frequent posting, the collection of fake friends, the updating of my goings-on. Why?

It took a few years to begin to see the drawbacks.

I don't miss it one little bit.

Here's why I left:

I didn't spend hours and hours at a time on Facebook. I spent pockets of time scurrying down rabbit holes--time I should have spent on other things. I wasted time doing absolutely nothing with no reward whatsoever. If I could get that time back over all the years I was a Facebook user, who knows what I could accomplish!

The relative anonymity of Facebook is fraught with the license to insult, malign, and judge. I found myself typing hurried reactions to news stories...and for what? I deleted almost as many comments. Did I really think my comment could change an opinion? It's a silly release of frustration that amounts to nothing. I was a courteous commenter...other comments I read were utterly malicious and truly horrid. We're all entitled to our opinions, but I realized I don't need to type them for strangers.

3. Friends are not friends.

Not at all. I realized that I am not a person who needs hundreds of friends and Facebook really brought that home for me. Friend is not just a word for me. If you're my friend, I really care about you. I was uncomfortable having hundreds of "friends" who really didn't know me from a stranger on the street. It was disingenuous. The number of friends one had on Facebook seemed to be a badge of honor and I just didn't buy that.

I love my friends, but I don't want to know every detail of their lives. For some, Facebook is a "person to talk to"...it is assumed that everyone will want to know an exorbitant amount of daily information. Yes, I unfollowed them, but even that doesn't stop all the chatter. It was exhausting. When 2020 ramped up it became even more tiring. I was convicted that my opinions are different from some of my friends. I didn't want to risk the real relationships by posting controversy. It's just not worth it.

It is a rare person who posts photos of their failures, their struggles, or their flaws. And when they do, it's typically for a reaction of some sort. Why? Those are things real friends know all about. The fake culture of "my life is so perfect" is a source of despair for some with anxiety and depression. Teens are especially influenced in a harmful way by all the fake perfection. I just couldn't be a part of that anymore.

Did I care about likes? Honestly, yes. No one admits that, but there it is. There was a time when I was bummed if I had a low amount of likes for something I posted. (ugh) In the last year or two, that need waned. I realized it was a shallow search for approval. It doesn't matter what people think of what I post. It doesn't. Best realization ever. What matters is real relationships. What matters is what God thinks of my social media behavior. What God thinks of everything I do in my day.

I watched a movie recently (after I left Facebook). It's called "The Social Dilemma." It was quite an eye-opener. I encourage you to watch it if you are a Facebook user...any social media user, actually. It really confirmed my conviction that I do not belong on Facebook. The misinformation and the manipulation of information Facebook feeds you, is shocking. I do my own research now...I seek to understand and inform myself rather than trust social media to do so.

Are there good things about Facebook? Sure. But I think it's important to weigh the good with the harmful--to examine how our life is influenced and how our use of social media influences others, for good and for harm.

As believers, we must consider how we're using our time and talent within social media to point others to the Gospel. Facebook was an effective platform for my writing, but I felt such a strong tug of the Lord to leave, I know He will provide another way. He doesn't need Facebook, and neither do I.

I left Facebook a couple of months ago. My biggest concern was the loss of connection with old friends, people I didn't want to lose touch with. I found that I haven't lost touch with anyone. Those real friends are readily within reach via text or email, and since I simply deactivated my account, I can still reach people on Messenger. I will eventually delete it, my messenger activity is less and less. Another concern was all the photos and some messages I didn't want to lose. You can download everything in a file. Easy peasy!

I can honestly say that I am utterly relieved to be free of Facebook. I'm not trying to convince anyone to leave, but if you're on the fence about leaving, I encourage you to take the leap into freedom.

Free is the best word to describe how I feel.

*I still use Instagram...very sparingly. It's easier for me to scroll past photos. Instagram also tells me when I'm all caught up so the rabbit hole syndrome is solved. I changed all of my settings to make my profile private, but I connect to other writers there, and that's been a positive benefit. For now, I'll stay there but who knows what the future holds.