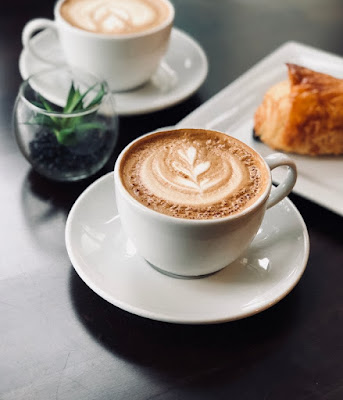 I sat at a table for four with my coffee and breakfast sandwich in a crowded coffee shop in Connecticut. As I sipped my coffee, two gentlemen came through the door and one approached me.
“Young lady, would you mind if we sit at your table?”
I liked him immediately. Having recently let my hair go back to its natural gray, the word young—in reference to me—was delightful to hear.
“Not at all,” I replied, waving them to the chairs on the other side of the table.
“Thank you, it’s not often people are willing to share a table these days. I’m Robert and this is Rex,” he said, pointing to his companion.
“I’m Heather,” I said. “Nice to meet you.”
They got in line and it wasn’t long before they joined me, and the three of us began to chat.
“Do you come here often?” Robert, a short, balding man was the first to speak.
“No, I’m on vacation from Washington State.” I replied.
“We were just there,” he said, glancing at Rex. “For a climate symposium, brilliant lectures, very academic.”
“Yes, we very much enjoyed it.” Rex was tall and thoughtful. The quieter of the two.
“That’s wonderful, isn’t the Northwest beautiful?” I couldn’t hide my PNW pride.
“Oh yes, it’s lovely,” Robert enthusiastically agreed, “What are you seeing while you’re here?”
I told them what I planned to do and see, and then they had some suggestions for me—which went something like this…
“She should see the blah blah blah,” Robert said.
“Oh yes,” Rex agreed.
“She could get there by boat I think.” Robert added.
“No, they don’t have boats there.”
“Yes they do.”
“No, they stopped running a while ago.”
“I think they do. I’m sure of it.”
“No, remember, we read about that in the paper. They stopped running the boats last year.”
Long pause. “Oh, you’re right. I do remember that.”
After no less than five of these old-married-couple exchanges, it occurred to me that the men were, in fact, married.
“We're planning to visit Yale,” I said.
“There’s a restaurant near the library, a vegetarian place, it’s lovely.” Robert said.
“Oh, are you vegetarian?” I leaned in. “My son is too, he used to be vegan—but not the militant, save-all-the-animals kind of vegan.” (I should have inserted my foot in my mouth right then, but I’m typically tardy in doing so.)
“Vegan is difficult but yes, we’re vegetarian and we do advocate for animals.” Robert said. He told me of his tour of a Perdue chicken farm and the horrors he witnessed. I redeemed myself by sharing that I keep a small flock of spoiled hens, none of whom would find themselves on my dinner plate.
“We should get some chickens,” Robert said to Rex.
“You think so?” Rex shook his head. Dressed in a suit, I could see he wasn’t the chicken-farmer type.
I took a bite of my dead pig and chicken embryo breakfast sandwich and felt a little foolish doing so.
They told me about a lecture series they’d recently attended at Yale—explaining that they were scientists. “It was quite enlightening.” Robert said. Rex nodded quietly.
Then Robert asked the question I always dread. “What do you do?”
I took in a breath and said, “Well, I was a stay-at-home mom for many years and then I wrote a novel. I’m working on revisions.” I looked back and forth between them for a reaction. They smiled and nodded.
“What is the name of your novel?” Robert asked.
“The Grace Writers.”
“The what?”
“The Grace Writers.”
“The great writers?”
“No, grace.”
“Excuse me?”
“Grace.”
“The Race Writers?”
“Grace.” I said the word loudly and clearly. Up to this point neither Robert nor Rex had any trouble hearing what I said, so this exchange was a bit odd to me.
“G-R-A-C-E?” Robert asked, spelling the word for clarification.
“Yes, The Grace Writers.” I smiled and took another bite of my death sandwich.
“Oh.” Rex gave Robert a look. Robert returned the look and their body language told me our conversation was over.
Robert turned to Rex. “As I was saying earlier about time-space continuum…blah blah blah…”
I’ll be honest, as I finished my coffee and listened to his observations on the evolution of time and space and the dimensions therein, I was taken aback by how one little word had abruptly ended our conversation.
Grace had confounded the scientists—and the end of our enjoyable conversation confounded me.
I’ll grant them—grace is hard to understand. It’s mysterious and startling—not scientific in the least.
I hope my sincere enjoyment of their company allowed them to see people of faith in a different light. Perhaps they noticed that we’re not all that intolerant of those with differing beliefs—that we can be on opposite ends of the spectrum of belief, but still enjoy coffee together…so long as they don’t mind dining with a carnivore.
Micah 6:8
This is what the Lord requires of you: Do justice, love kindness, and walk humbly with your God.
at May 20, 2019

Proverbs 15:15 All the days of the oppressed are wretched, but the cheerful heart has a continuous feast. (NIV)   Our enemy (human and spiri... 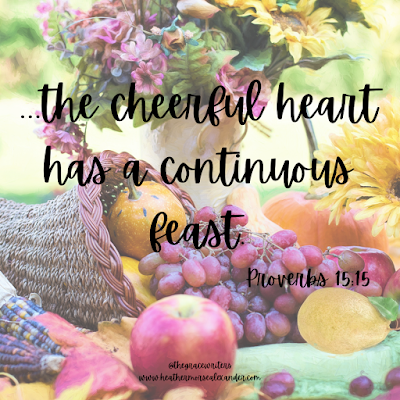